Blaise, is best known as the patron saint of people with sore throats. On this day in many places people gather in churches for the blessing of throats.

Summary of St Blaise: Blaise was a fourth century bishop at Sebaste (now the city of Sivas in central Turkey, in what was then the Roman province of Armenia-Cappadocia).  During a persecution – probably ordered by Constantine’s ally and co-emperor Licinius – he was martyred in 316 AD.  This much at least seems to be historical fact, according to the New Roman Martyrology 2004.laise is widely regarded as the patron saint of sore throats.

Patrick Duffy asks who was Blaise and why he became famous for blessing sore throats. He then outlines some of the practices associated with his cult and evaluates them in the light of the Vatican’s Directory on Popular Piety and the Liturgy .

Using two crossed and unlighted candles, the priest (or other minister) touches the throat of each person, saying: Through the intercession of Saint Blaise, bishop and martyr, may God deliver you from all ailments of the throat and from every other evil: + in the name of the Father, and of the Son and of the Holy Spirit. Amen.

Usually the blessing takes place during Mass.  It follows the homily and the prayer of the faithful.  If done outside of Mass, a brief celebration of the word of God with the scripture readings suggested in the Lectionary is recommended before the blessing is given. 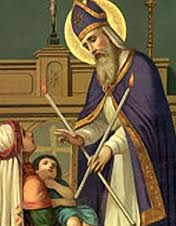 In the Eastern churches his feast falls on the 11th February, in the West on 3rd February.

Stories about him in the martyrology accounts
In the Middle Ages Blaise became one of the most widely venerated saints in the Western Church even though he was from the East.  Different accounts of his life and stories about him appear in the 9th century martyrologies and these give us a clue to the source of his popularity.

How has he become so famous for the blessing of throats?The most significant detail tells that when Blaise had been captured and was on his way to prison, a boy was brought to him in danger of choking from a fishbone stuck in his throat.  Blaise prayed over him and he was cured.  (Perhaps to fill out his healing credentials, it is also reported that before he was chosen as bishop, Blaise had practised as a physician.)

Another detail recounts that when the persecution began, Blaise withdrew from the city of Sebaste and lived in a cave in the wilderness where he befriended the birds and wild animals.  He cared for them and they watched out for him. So we needn’t be surprised that he becomes a forerunner of St Francis as patron of all kinds of animals.

It is also reported that when he was arrested on orders of the local governor Agricolaus and again on his way to prison, a woman whose pig had been carried off by a wolf begged him to help her.  He promised with a smile that her request would be granted.  Shortly afterwards the wolf appeared at the woman’s door depositing the pig at her feet.

And finally about the manner of his death – it is told that he was first beaten, then put on the stone table used for combing out wool and flayed with the prickly metal combs that remove tiny stones from the wool.  Finally he was put to death and beheaded.

The institutional Church did not turn false all at once

Primarily and openly under John XXIII the Mass was already going protestant and incurring the anathema (Excommunication) of the Dogmatic Council of Trent.

The institutional Church did not turn false all at once, or even at the Vatican II Anti-council (1962-1965). In fact, the heretical Modernists were already doing their dirty work from at least the reign of Pius XII (1939-1958). In 1948 some of the heretical Modernist liturgical revolution began after the regretful appointment of the Freemason Hannibal Bugnini as General Secretary to run the commission which ended up initiating the wholesale change of the traditional liturgy.

That commission’s very name, Pontificia Commissio pro Generali Liturgica Instauratione (Pontifical Commission for a General Reform of the Liturgy), or the “Reform Commission” for short, indicated its nefarious purpose. For twelve years this Pian Commission worked hard to destroy the Roman Catholic Mass and substitute for it a Protestant service. That goal was achieved partially with the Half New Mess of 1960-1962 and the Full New Mess of 1969.

The Commission’s final project, the Protestantized Half New Mess of 1962, included a wholesale revision of the Calendar, of the ranking of feasts (which demoted or abolished feasts of Mary and the Saints), and even of the sacrosanct Sacred Canon of Holy Mass.

To take just one example, which was sneaked into the Half New Mess of 1962, has great Sacramental significance. The Sacred Canon of the Mass, which begins after the Sanctus and ends after the Pater Noster, contains the holy words of Consecration, handed down (tradita) from Christ and His Apostles themselves. It is the earliest and holiest part of the Mass, changing which subjects the Mass into invalidity, i.e., makes it null and void, with no grace and no valid confection of the Most Holy Eucharist.

The dogmatic Council of Trent declared an anathema (excommunication) of anyone who dared to deny the Apostolic teaching: “If anyone says that the rite of the Roman Church, according to which a part of the Canon and the words of Consecration are pronounced in a low tone (submissa voce), is to be condemned” (Sessio XXII, Cap. IX, Can. 9) because of its holiness and solemnity. In the Traditional Latin Mass from Trent and before, the priest is required from Apostolic Tradition to use three tones of voice:

The first step toward the Protestantized “New Mess of 1969” (no longer the Mass) was elimination of the low voice in 1960. Within a decade, in the New Mess, the silent tone was eliminated altogether because Martin Luther disputed the true Catholic priesthood and advocated the heresy of the “priesthood of the people.” Thus, thus the purveyors of the New Mass incurred the anathema (excommunication) decreed by the dogmatic Council of Trent.